Show me a Story :: Book Review 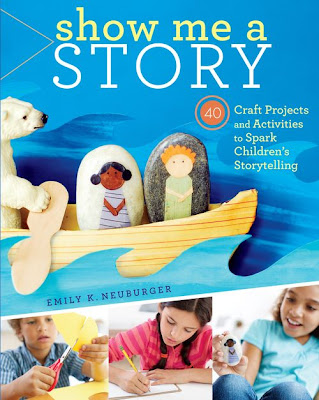 Dear Friends, today you are in for a treat because I am going to tell you about the most delightful book:  Show me a Story by Emily Neuburger.  I loved this book from the very beginning when Emily invites us in her gentle voice, full of whimsy:

Trust your imagination.  Walk openly into the unknown land of a story.

Does anyone else remember, as a child, getting lost in imagination?  Isn't it beautiful, as an adult, to watch young children at play, exploring their own imaginations and stories...

The ideas in Show me a Story are perfect for parents, teachers & therapists, and most of the activities can be created using craft materials found at home or easily obtained at a local store.  The projects themselves are unfussy and uncomplicated, but they invite depth and exploration within the world of story.

The day the book arrived at our house, my older son & I looked at it together; then I asked him to choose a project. He was immediately drawn to the story-dice, plus he wanted a bag designed to hold the dice (isn't there something special about having a bag to hold magical items... magic beans, magic stones... or dice?) 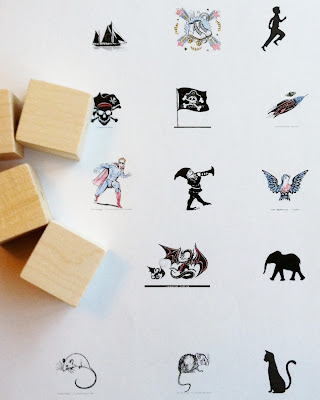 Emily made her dice using colored pencils to create sweet drawings on small wooden blocks, but I decided to take a slightly different tactic.  Wooden blocks in hand, I went in search of clip-art. (And, just in case you are wondering where my older son was during this story-dice making project... well... he was sitting right next to me, engrossed in this book.  I did not interrupt him.  After all, who am to get between a boy and his Middle Earth adventures.) 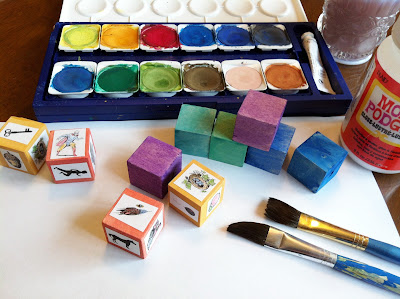 I used watercolors to paint my wood blocks, glued on the images and then gave the dice a coat of Mod Podge to seal everything up.

This was such a quick, easy project that I made two sets (one to keep and one to give.)  Each set has five dice: the first has people/characters, another has various animals, one has random small items (an acorn, a key, etc...), one has modes of transportation and the last one has images of weather conditions plus a few possible ideas for locations (a castle, a forest, etc...) 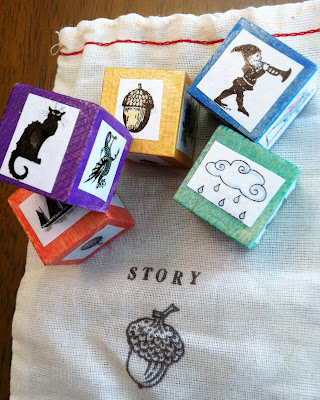 The first time we rolled the dice, I told my son a story about Skipper the Space Dog who soared to the moon on his magical flying schooner where he met a dragon who tried to eat him.  Skipper the Space Dog convinced the dragon to try some of the moon-cheese and together they discovered that the moon tastes like the finest Gruyere.  This caused the Dragon to reminisce about his glory days of fame and fortune in Paris 200 years ago when the king gave him a golden "key to the city."  However, the dragon had been banished to the moon for the past 200 year because he had eaten all the cheese in Paris, and was shocked to learn that, 200 years later, there was no longer a king of France.  Skipper the Space Dog convinced the Dragon that all would be forgiven if he returned to Paris, and that he might even be welcomed personally by the Prime Minister.  So, they flew back to France together in Skipper the Space Dog's magical flying schooner and feasted on some fine Camembert.  Very silly... non?

To see more beautiful and fun projects from this book, you can visit this blog here, this one here and this one here! 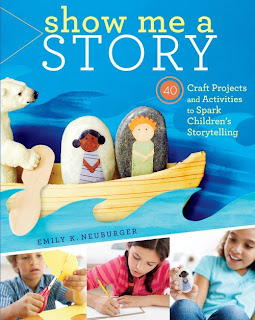