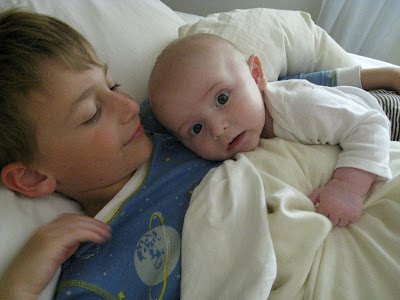 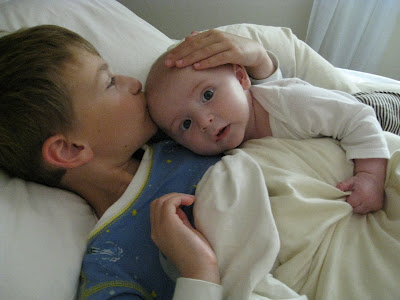 As we celebrate Rosh Hashana (the Jewish New Year) and Yom Kippur (the Day of Repentance) I find myself grateful for the apple tree in my neighbor's front yard. Traditionally for Rosh Hashana we eat apples dipped in honey -- apples to symbolize the round earth and honey for a Sweet New Year. 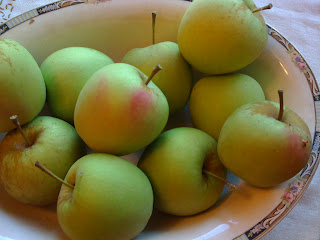 Besides eating apples & honey, it's traditional to prepare sweet dishes with apples. I was visiting Little Green Bums the other day and discovered her link to a recipe for apple cake over at The Inadvertent Farmer. I can't wait to try it... 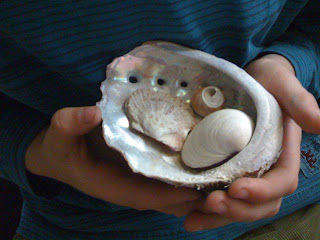 Last week we celebrated Rosh Hashanah -- the Jewish New Year. One of our favorite rituals associated with this holiday is called "Tashlich" which means "casting off" in Hebrew. 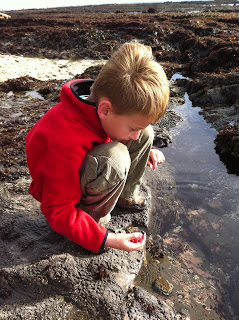 Tashlich is thought to have originated during the Middle Ages inspired by a verse attributed to the prophet Micah:

God will take us back in love;
God will cover up our iniquites,
You [God] will hurl all our sins
Into the depths of the sea. (Micah 7:19) 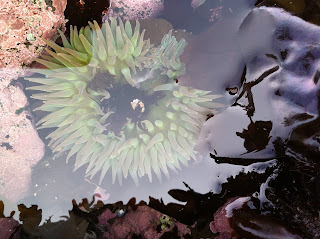 To perform the ritual of Tashlich, one symbolically casts off one's wrong-doings or transgressions of the previous year by tossing bread crumbs into a body of water. As the bread crumbs are carried away (or eaten by fish) one's sins are symbolically cast away, giving the opportunity for a fresh start in the New Year. 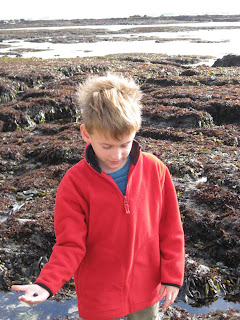 My husband and I first observed Tashlich together in 2001, the week after 9/11. The world had suddenly become sadder and scarier. As we performed Tashlich, I looked out and saw sea lions on the rocks 20 yards from shore. They were peaceful basking in the bleak Autumn sun. The world had changed for us, but it had not changed for them, and that was comforting. 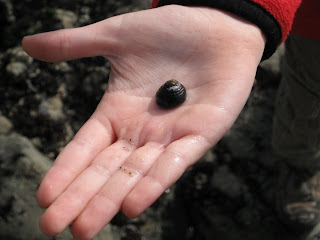 This year we performed Tashlich at the Fitzgerald Marine Reserve -- a tide pool wonderland where, if you look carefully, you can find turban snails & hermit crabs, star fish & sea anemone, sea cucumbers, several types of small fish (the names of which escape me at the moment...) and beautiful sea lions basking nearby on the rocks. 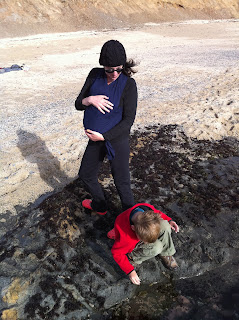 As you can see in the photos, we do not have "sunshine & palm tree" type beaches in Northern California (if you want sunshine and palm trees, you'd best head for Southern California, Hawaii or Florida...) Around here, we bundle up in pull-overs & hats when we head to the beach. Our beaches are gray, blustery and cold -- with those soulful-eyed sea lions who just might be related to the selkies of Ireland... 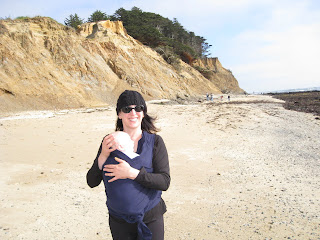 A few years ago I was doing some research about Tashlich and stumbled on this sweet story called "Breadcrumbs & Magic." Maybe it will inspire you to head to your local beach (or body of water) for a bit of spiritual cleansing. Either way, I wish you Shana Tova -- a Good Year, a Sweet Year. 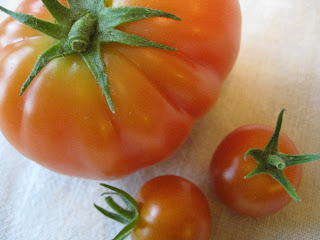 The title of this post ("A Bountiful Harvest") is a bit of a joke... If you have a look at the photo above, you can feast your eyes on the lion's share of this year's garden bounty. What with an unusually cool summer, added to the fact that, this being the first year we've attempted a vegetable garden, mistakes were made...

We began our garden with such high hopes... but as autumn approaches, here is the sum total of our harvest: 3 strawberries, 3 cherry tomatoes and 4 medium size tomatoes. Our cucumbers & summer squash have all withered on the vine. Our pumpkin vine fell victim to a powdery mildew infestation. The bean vines, planted outside the chicken wire fence, were nibbled down to stubs by a local doe and her 2 spotted fawns. I can hardly begrudge a mama and her babies a bit of breakfast... but, oh rats, I was looking forward to those blue-lake beans. At least the morning glories and nasturtiums add their bright blossoms to our blighted plot.

There's always next summer (and thank goodness for our local farmer's market -- at least someone had success with their cucumbers & summer squash this year.)
Posted by m. bloom at Wednesday, September 08, 2010 4 comments: 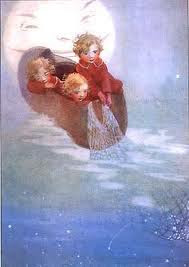 Wynken, Blynken, and Nod one night
Sailed off in a wooden shoe---
Sailed on a river of crystal light,
Into a sea of dew.
"Where are you going, and what do you wish?"
The old moon asked the three.
"We have come to fish for the herring fish
That live in this beautiful sea;
Nets of silver and gold have we!"
Said Wynken,
Blynken,
And Nod.
The old moon laughed and sang a song,
As they rocked in the wooden shoe,
And the wind that sped them all night long
Ruffled the waves of dew.
The little stars were the herring fish
That lived in that beautiful sea---
"Now cast your nets wherever you wish---
Never afeard are we";
So cried the stars to the fishermen three:
Wynken,
Blynken,
And Nod.
All night long their nets they threw
To the stars in the twinkling foam---
Then down from the skies came the wooden shoe,
Bringing the fishermen home;
'T was all so pretty a sail it seemed
As if it could not be,
And some folks thought 't was a dream they 'd dreamed
Of sailing that beautiful sea---
But I shall name you the fishermen three:
Wynken,
Blynken,
And Nod.
Wynken and Blynken are two little eyes,
And Nod is a little head,
And the wooden shoe that sailed the skies
Is a wee one's trundle-bed.
So shut your eyes while mother sings
Of wonderful sights that be,
And you shall see the beautiful things
As you rock in the misty sea,
Where the old shoe rocked the fishermen three:
Wynken,
Blynken,
And Nod.

In the Town All Year 'Round 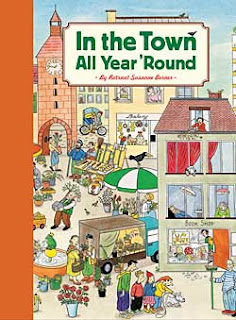 Have you seen this book? If not, head to your local library. If they don't have a copy, suggest they buy a copy. If they won't purchase a copy for their collection, consider purchasing a copy for your own collection!

This book is too much fun... Every page has a scene of a small town populated by busy townsfolk going about their business. From page to page, you can follow the adventures of the various characters as their lives unfold through the seasons. The stories of the characters are wordless, but at the start of each of the 4 seasonal chapters there are riddles to solve and small secrets to uncover. "Why is Suzie going to have to buy a new hat?" "What are Ellen and Timmy bringing to the party?" "Who is Isabella talking to on the phone?" and "Where are Iris and Charlie going with those pumpkins?"

Excuse me please, and pardon me for not writing more... Little Mr. and I are now busy trying to figure out what Peter is going to do with the dragon lantern he has made...
Posted by m. bloom at Monday, September 06, 2010 2 comments:

The Night You Were Born 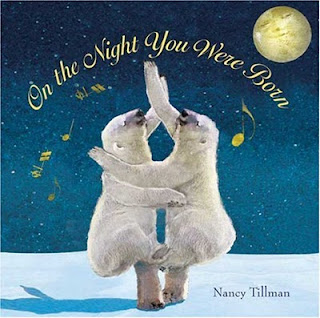 For never before in story or rhyme
(not even once upon a time)
has the world ever known a you, my friend,
and it never will, not ever again...
-- Nancy Tillman

Yesterday, we were browsing in one of our favorite local independent book sellers and, oh my word! I came across one of the most beautiful books for young children. For me, one of the joys (among many) of having a new baby is having the opportunity to rediscover our old favorites and also discover the new and wonderful books which have been created during the past 7 years...
Posted by m. bloom at Thursday, September 02, 2010 1 comment: 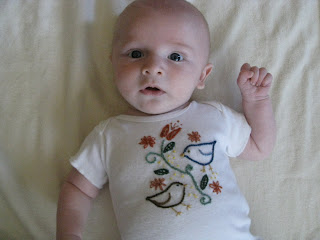 Thank you Caroline -- this baby shirt is gorgeous! I'm thinking of framing the embroidery as soon as wee Bloom grows out of it. (For viewers at home who don't have a close-up view... it's hand embroidered... dainty french knots, elegant chain stitching... lovely, lovely, lovely...)

But Caroline, please be advised, Sweet Baby might not be wearing it when we cross paths during pick-up time at school in an hour. As you know, this baby is a prodigious spitter. He's already nailed the shirt once this morning -- goodness knows what the shirt will look like an hour from now. 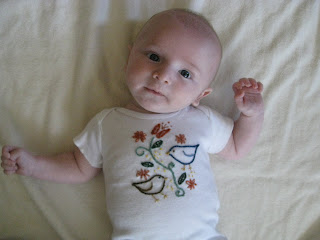