I had been intending to make one of these for a long time... 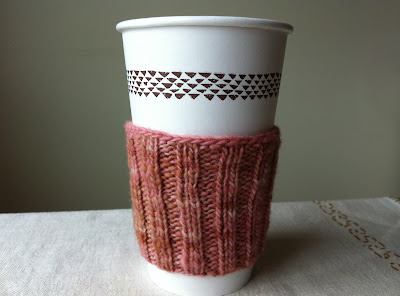 I usually drink coffee at home; however, I find myself, every week or two, at my local coffee vendor, picking up a pound of coffee.  They always offer me a free drink, and who am I to turn down a cup of something warm, aromatic and caffeinated?  I always compost or recycle the paper cups, however, there is the added issue of whether to use the optional cardboard coffee sleeve.  I don't like burning my fingers on a hot cup, but neither do I like creating an extra piece of waste... Hence, my long unfulfilled intention. 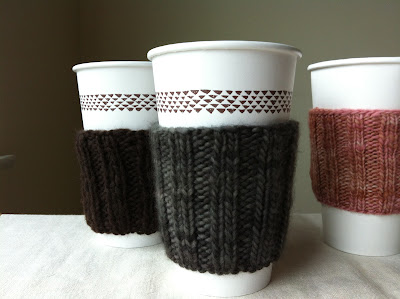 So, last week, I got out some size 3 knitting needles and a ball of pretty pink & beige, hand-spun which I picked up here several years ago.  Then I made 2 more coffee cup sleeves as gifts for my brother (he lives in Seattle, which is coffee-house mecca, as far as I'm concerned.)  The ones I knit for my brother were made from Malabrigo Worsted Merino (Black Forest) and Manos Del Uruguay, Wool Classica (Coffee) on size 7 needles. 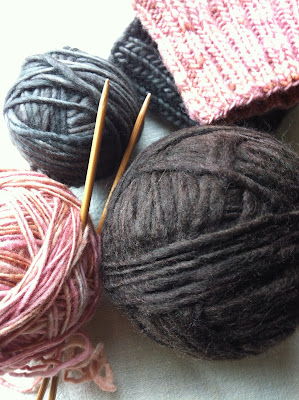 My pattern was very basic -- for the thicker yarns, I cast 42 stitches on my size 7 needles, went back and forth in a k2, p2 ribbing, bound off and sewed up the seam with a mattress stitch.  Done.  It could also be knit in the round on a set of double-pointeds, but I didn't feel like it. For more ideas you can head over to Ravelry and do a search for "coffee cup cozy" or "coffee cup sleeve."  You will find endless ideas and free patterns... 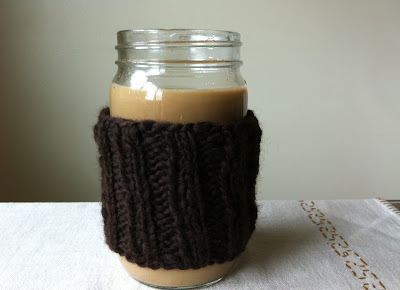 These work well, too if you like to drink your coffee from a pint-jar... 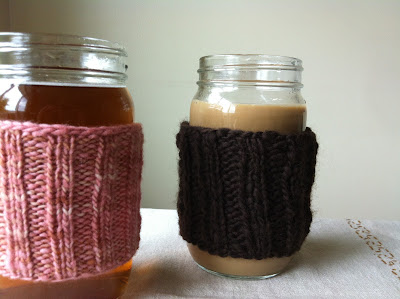 And it's always nice to have a second one lying around in case a friend drops by for tea... 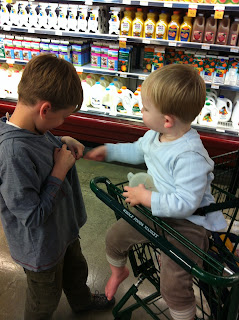 I had a realization a few weeks ago. 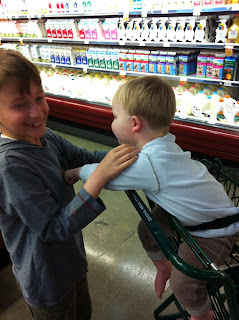 We were at the grocery store.  I was watching my older son playing with his brother who was strapped in the grocery cart.  My Little Mr. was tickling his little brother and making him laugh... hysterically... 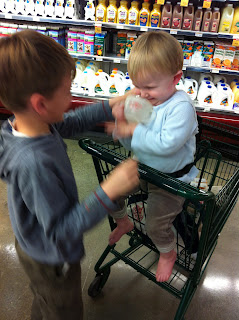 During the years we struggled to grow our family it was painful for me to watch children at the grocery store -- the baby in the cart and the older child dancing around, making the baby shriek with glee while the mother fussed at the older child, "Stop it! Be careful!  You'll tip the cart!"  I wanted this for my older son (and for the child I feared I'd never have.) That relationship... someone to tease and play with, even at the grocery store. 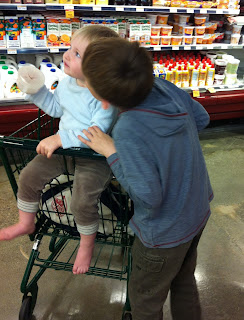 So, it happened the other day... toddler in the cart laughing at the antics of his brother.  Only, I wasn't fussing at them.  I was smiling and laughing because I realized that the moment had arrived in my life... the one I had longed for and wished for.  Seeing my children laughing in the grocery store was a dream come true for me.
Posted by m. bloom at Monday, April 23, 2012 11 comments: 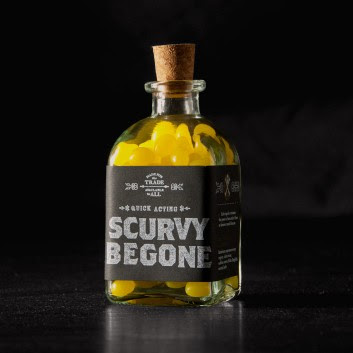 The store is part of 826 Valencia, founded by the writer Dave Eggers, and benefits free writing & tutoring programs for children ages 6-18 at 826 Valencia and schools all over San Francisco. To learn more about the programs, you can have a look here. 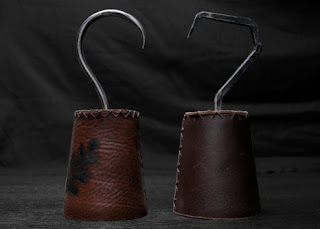 In case you're in need of some Scurvy-Begone (or a glass eyeball) but cannot make it to San Francisco any time soon, they do have an online store (modern pirates, these ones are...)  Even if you don't need any Scurvy-Begone, the online store is a fun place to browse... 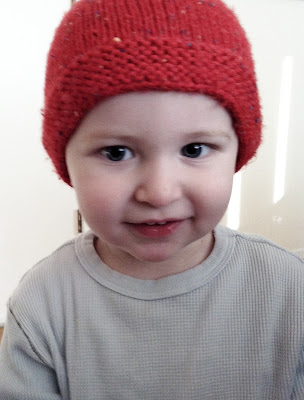 The other day my Wee Bloom and I were looking at pictures in the book Children of the Forest by Elsa Beskow.  My little fellow pointed to the round, red toadstool hats worn by the children in the book, then patted the hat on my head, patted his own noggin and solemnly intoned, "Hat." He looked at me with anticipation when I asked him whether he would like to have a red hat, too, so we went upstairs to conduct a search.  Perfect... here is one I knit up for his brother 4 years ago. 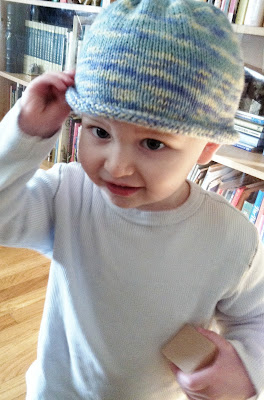 He also tried this hat (originally knit for his brother while I was pregnant.)  I'm afraid, however, that Wee Bloom was not a fan. 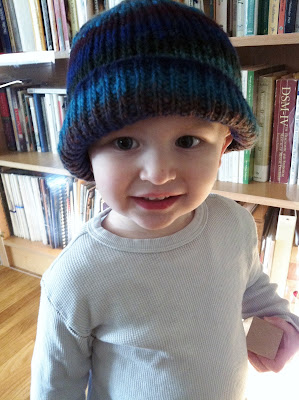 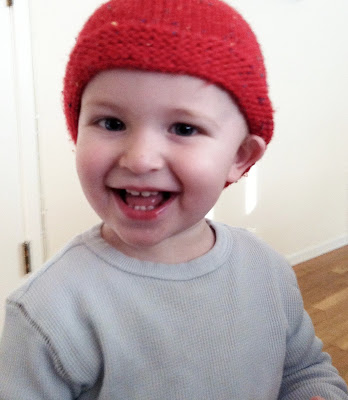 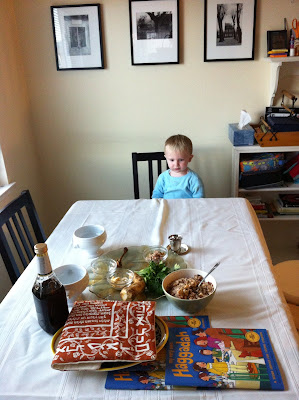 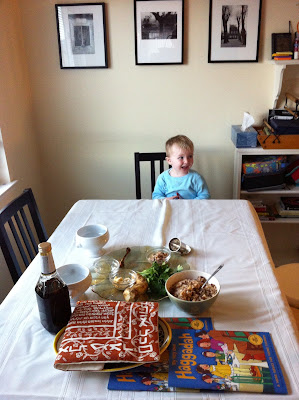 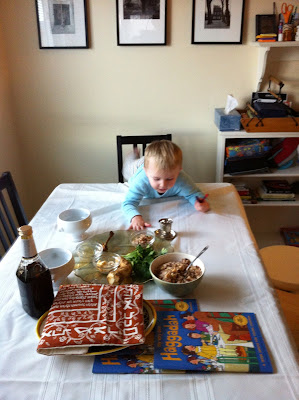 Happy Passover to you and yours (and if it's Easter you celebrate, Happy Easter to you!)
Posted by m. bloom at Saturday, April 07, 2012 7 comments:

Poisson D'Avril (and a most peculiar peg doll) 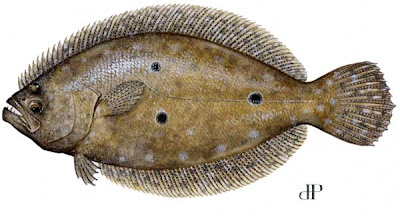 I'm not sure where I first heard of Poisson D'Avril... the origins of this odd observance are rather obscure.  One theory I came across credits Pope Gregory for creating confusion when he set up his eponymous "Gregorian Calender" in 1562.  When Pope Gregory instituted the calender, the start of the new year was moved from April 1st to January 1st, and those who persisted in celebrating the start of the year on April 1st were called "April Fools."  What this has to do with fish (and French fish, for that matter) I have no idea, but Google and Wikipedia seemed to think that, somehow, the two are linked.

The one place I was able to track down a story linking fish and April Fool's Day was within the book All Year Round by Ann Druitt, Christine Fynes-Clinton and Marije Rowling. According to the authors of All Year Round, the celebration of April Fools Day commemorates the birthday, on April 1, 1752, of Olaf Toyou, the first born son of Hungarian fisher folk.  The story goes as follows:

When Olaf was 6 months old, a strong earthquake struck far out in the Mediterranean. Olaf was sleeping in a cradle slung from the branch of a tree while his mother worked nearby.  The earthquake caused the sea to race up the beach so quickly and quietly that she didn’t notice the waves had carried Olaf away until it was too late.  She ran to save her son, but all she found in the cradle was a small fish.  Olaf's mother ran to find her husband, crying that their baby was gone, and while her back was turned, a second tidal wave miraculously removed the fish and returned the baby to the cradle. When the husband looked inside the cradle and found his son, he berated his wife as a fool.  She, however, remained convinced that her son had the power to turn himself into a fish at will!

To this day, people in France must beware of turning their backs on April 1st.  They may later discover a paper fish pinned to their jacket and realize with embarrassment that they have become the ‘Poisson d’Avril’(‘April Fish.’) 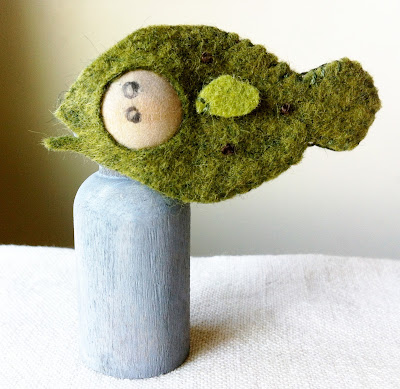 Hungarian fisher-folk? French fish?  Again, I'm a little confused.  And what, pray tell, does all this have to do with peg dolls?  Well, last year, I hosted a peg doll swap and my friend Caroline signed up to participate. She couldn't decide what type of doll to create for the swap but told me that, because of her love of cooking, she felt her inspiration would surely come from a recipe.  I glanced over at her  four shelves full of cookbooks and came up with some helpful (okay, appalling, if truth be told) suggestions for her peg dolls: Poached flounder with butter & herbs? Chicken vindaloo? Shrimp ceviche? A cheese & mushroom omelet? Needless to say, she did not take any of my suggestions.  I, however, have decided to rise to the challenge.  I submit to you a Flounder Peg Doll... my very own Poisson D'Avril. 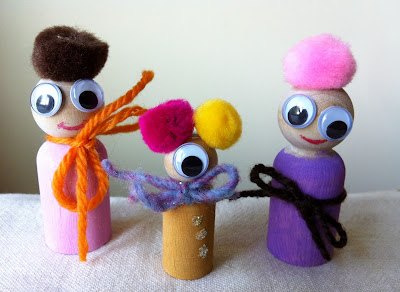 Have you ever come up with a creative idea, so peculiar that you simply had to see it through?  This sort of endeavor reminds me of the beer milkshake, dreamed up and desperately craved by the character Doc in John Steinbeck's book Cannery Row.  Perhaps, even at this moment, you are feeling inspired by my Peg Doll Flounder.  Is it time for you to try to out-do me and create the most dreadful peg doll ever? Something even uglier than my flounder?   Now that will be quite the task...  I dare you! 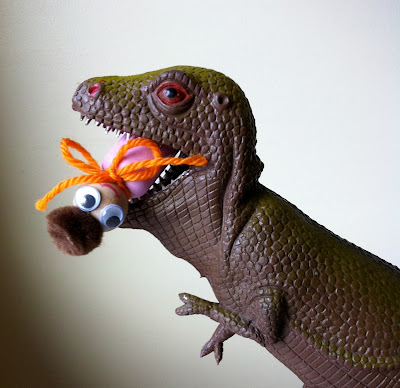