The Star Apple: A Puppet-Play Story


In searching out tales for puppet shows, I was drawn to The Story of the Root Children, not only because it's a beautiful depiction of the season's cycles, but also because of the presence of mother & child archetypes.  I felt that puppets created in the images of these archetypes would make versatile players for many & various stories. 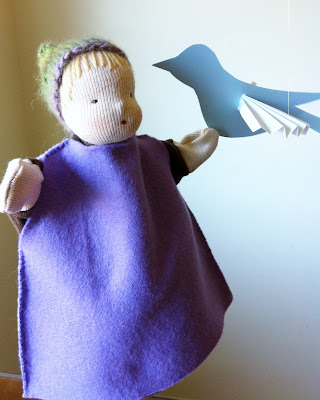 Another story which I thought could be played nicely with a pair of mother & child puppets is known as The Little Red House with No Doors and No Windows and a Star Inside.  It is also sometimes referred to as The Star Apple.  I first encountered The Star Apple in a book called Healing Stories for Challenging Behavior written by Susan Perrow (published by Hawthorn Press.)  I highly recommend this book, not only as a source for many good stories, but also because the book discusses how to guide children through difficult situations using stories (The Star Apple story appears in the section for stories when a child is feeling bored or whiny); in addition to this, the book offers guidance in creating original stories for individual children according to their needs.

Now, on to The Star Apple!  It is usual for this story to start out with a child and his mother.  Other characters the child encounters include a little girl, a farmer, an auntie or grandmother and the wind.  Not having puppets on hand at the moment to play a little girl, a farmer or an additional mother/grandmother, I have simply substituted a little bird in my version.  This is the beauty of stories... they can often be adapted to suit your situation.  Here is a link via Mommy Nature.com to a version of the original story; for your own use, feel free to adapt the story, or use it as written!


The Star Apple
(my own adapted version) 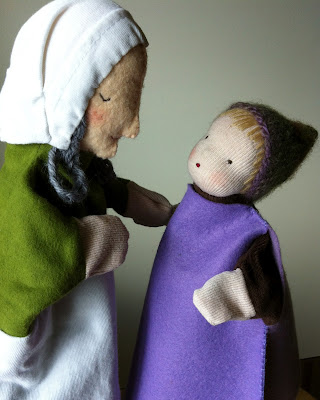 There was once a little boy, about the same age as you, in fact.  One afternoon, he grew tired of looking at his favorite book, playing with all his toys, and drawing pictures, so he went to his mama and asked, "What shall I do now?"  His mama replied, "Why don't you go on an adventure?  You can search for a little red house with no windows and no doors and a star hiding inside.  When you find it, please carry it gently home to me."  The little boy looked back at his mama with confusion and curiosity.  "Where can I find such a house?"  he asked. His mama pointed out the window and suggested he start his search by skip-hopping across the field and up the hill. 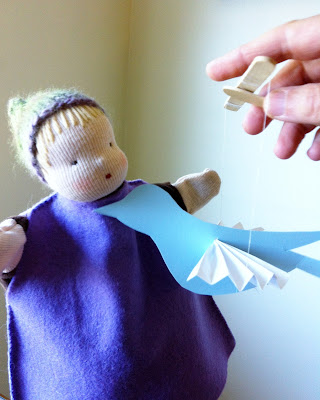 Off he went skip-hopping across the field, until, distracted by a pretty little bird perched on the branch of a gorse bush, he paused to say hello.  "Good afternoon, little bird," he said.  "Can you tell me where I might find a little red house with no windows and no doors and a star hiding inside?"  "Indeed," replied the little bird, "I don't think I've ever seen such a house, though it sounds awfully nice.  Perhaps you should ask the wind.  The wind blows everywhere.  It sees and knows everything, so surely the wind would know where to find such a house."  Then the little bird picked up a tiny twig in her beak and fluttered off to add the twig to her nest.  "Goodbye little bird, and thank you," called the boy as she flew away. 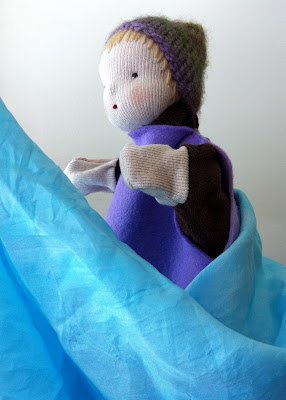 Standing next to the gorse bush in the middle of the field, the little boy wondered how to find the wind. He decided to start by calling it; so, he pointed his face up to the sky and called in a very loud voice, "Wind!  Wind!  I need to talk to you!"  A moment later he felt a brush across his cheek and a mischievous, invisible hand pulling at his cap as if to steal it away.  The boy laughed and held onto his hat for he knew the wind had heard his call.  "Wind!" he cried, "Do you know where I can find a little red house with no windows and no doors and a star hiding inside?  Next he felt the wind whoosh around him, push gently at his back and then rush forward toward the hill at the end of the field.  The little boy ran as fast as he could, keeping pace with the wind, to the end of the field.  Together he and the wind rushed up the hill, and at the top of the hill was a tree. 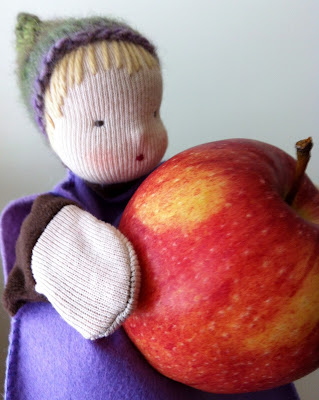 The wind swirled through the branches of the tree, and plop! Down fell a beautiful, red apple, right at the feet of the little boy.  "Oh!" said the little boy excitedly, "A little red house with no windows and no doors, but where is the star?"  He gently lifted the apple in his hands and called to the wind as it rushed away towards the sea, "Thank you, dear wind!  Thank you very much!" 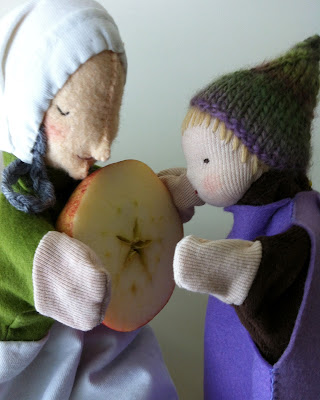 Carefully, the little boy carried the apple back down the hill, across the field and into the house where his mama was waiting for him.  "Look mama, look!"  he cried, "I have found a little red house with no windows and no doors, but I cannot see a star inside."  His mama cut open the apple from side to side, and there they found the star.  I can see it.  Can you see it, too? 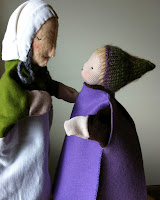 This is only one story I found which would be nice for telling with puppets of mother & child.  Can you think of any others?  What stories would you tell?