Make the Bread, Buy the Butter 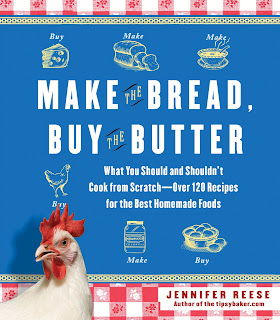 I felt briefly smug in the certainty that I was not so lazy or compromised that I would ever buy mass-produced peanut butter and jelly sandwiches.  Then I thought, People probably once said that about peanut butter.  And bread.  And jelly.  They almost certainly said it about waffles, and pie crust, and pudding.  Not so long ago, people must have wondered who couldn't fry her own donuts, grind her own sausage, cure her own bacon.  Kill her own bacon!  The more I thought about it, the more arbitrary it seemed to draw a line in the sand at frozen PB&J.
(Jennifer Reese, from the introduction of  Make the Bread, Buy the Butter)

Last week I bought this book as birthday gift for a friend, but since her birthday isn't until December 1st, I've already nearly finished reading it, cover to cover (sorry Caroline, I've done my best to keep it clean!)  After I put the turkey in the oven on Thursday, instead of taking the time to change out of my pajamas, I sat myself down at the kitchen table (pajamas and all) and read to my little heart's content (I also amused my mother by reading the funniest parts out loud so she could enjoy it, too...)

I was fascinated by the idea of this book when I spotted it: The author makes her way through an extensive list of food items one might usually buy pre-packaged and then breaks things down by discussing whether it tastes better (or not) to make it from scratch, listing objectionable ingredients which might be added to non-homemade items, the cost-effectiveness of making each item by scratch, and also how time/labor intensive each "project" might be.  For me, the most delightful parts of the book were the author's accounts of keeping chickens for eggs and goats for milk.  I won't spoil the fun by recounting here the authors conclusions regarding animal-keeping -- you'll just have to track down this book and read for yourself!

As for following the advice contained in this book?  Despite the authors recommendations, I don't think I'll be making my own bagels, croissants or tortillas, curing my own pastrami, or setting myself up to make Mascarpone & Camembert cheeses any time soon. I still have a pasta-maker, in it's original box, which we received as a wedding gift over 11 years ago, for goodness sakes!  But I love this book... If you read it, let me know if you like it, too!

And just for fun, if you leave a comment, won't you tell me what crazy & ambitious things you like to make from scratch?  What do you feel guilty about buying pre-made (but buy anyhow!) Me?  I like to bake the daintiest of cookies and sandwich them together with jam.  Pre-made guilt? Broth.

P.S.  FYI, in case you're interested, the author of this book (Jennifer Reese) has a blog: The Tipsy Baker.
Posted by m. bloom at Monday, November 28, 2011